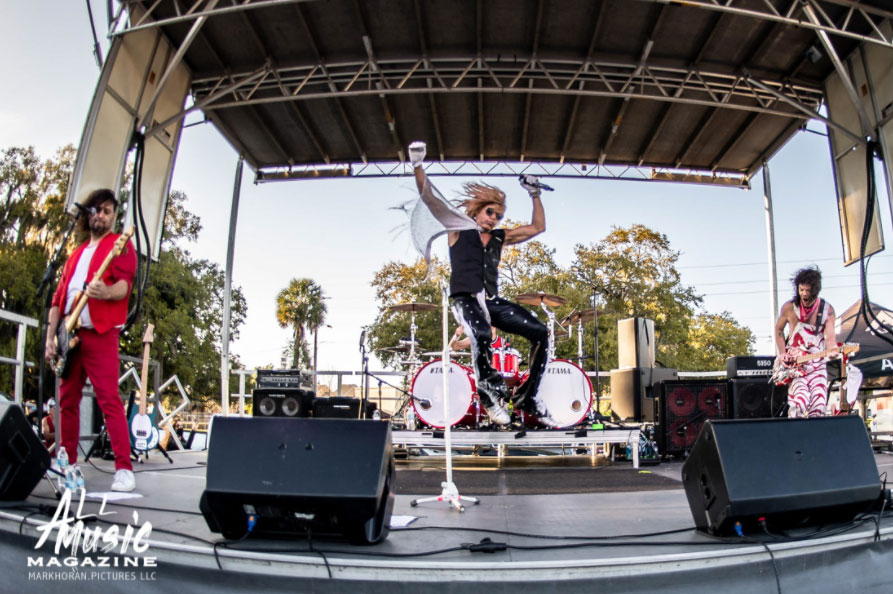 Sunday, March 7, 2021 was supposed to be funday, so a long ride into Daytona Beach after leaving there 12 hours earlier didn’t seem to be in the cards. That’s no problem as the 80th Bike Week Celebration extends all the way to Sanford, Florida which is where All Music Magazine headed to Henry’s Food Depot to cover the band Completely Unchained, a Van Halen tribute band that I have been dying to get out and see. Sitting in with the band on this day would be All Music Magazine’s old friend, drummer Zoltan Chaney. We haven’t seen or talked to Zoltan since right before the pandemic.

The stage was outside behind the venue and fans were huddling together trying to keep warm and out of the wind. Inside the bar was a VIP area with couches which looked warm and cozy but had no view of the stage? In the sun the temperatures were comfortable and by show time at 5:00pm the shadows were stretching across the crowd. There were many local musicians and photographers in attendance to get a glimpse of what all the buzz was about. Most tribute bands are uninspiring and are poor representations of the original act.

I met the band members before the show and they looked like normal middle aged men. When they took the stage, the transformation was astonishing. Bass player Julian Simonelli looked like Michael Anthony, Jake Miller actually looked like Eddie Van Halen, well Zoltan looked like Zoltan, and Gene Henriksen had a likeness to David Lee Roth. It was as if the band was cast by their looks.

The show started with a bang Henriksen immediately started the acrobatics we have come to expect from Van Halen’s first lead singer complete with leg kicks and jumps. He even had the vocals to convince the audience he was David Lee Roth.

Jake Miller played the guitar licks and solos as if Eddie Van Halen had gaven him personal lessons. Julian Simonelli from Tampa played the bass the way Michael Anthony would.

They had the mannerisms of each member of Van Halen and the show really felt you were at a Van Halen Concert.