In Ocala, tribute bands are the next best thing 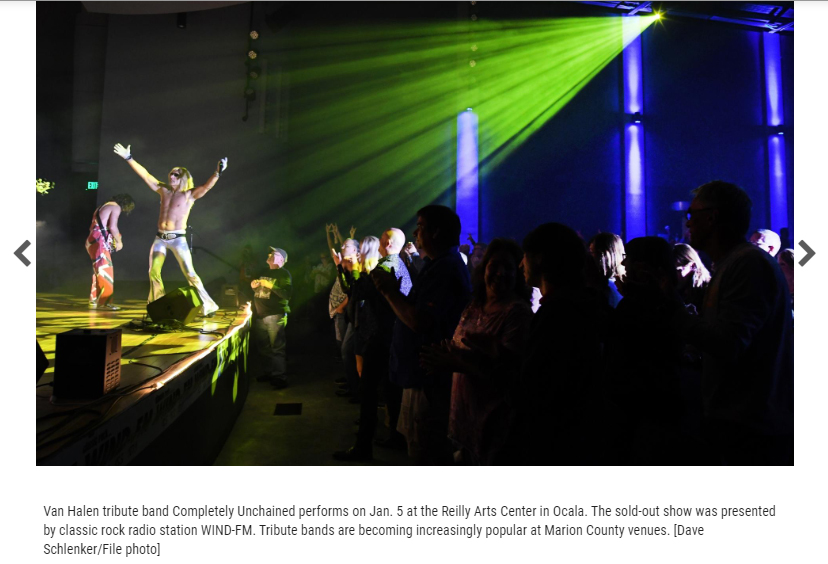 They look and sound the part, and nostalgic audiences love it

In January, the rock band Completely Unchained stormed the Reilly Arts Center stage in a crank-it-to-11 flurry of sparks, leaps and wild hair. Lots and lots of hair.

That’s what hundreds of people were thinking that night, as Completely Unchained not only played Van Halen’s hits but inhabited the style and swagger of the legendary California party band.

The show was part of the WIND-FM Rocks the Reilly Series, now in its third season. The Ocala-based classic rock radio station brings tribute bands into the arts center, and the shows have proved very popular, often selling out.

While the burgeoning local arts scene is presenting many headliners and fresh new acts, there definitely is a diverse menu of tribute bands. Consider upcoming shows at local venues:

Let It Be – The Beatles, Saturday

Circle Square Cultural Center in On Top of the World: Absolute Journey, TUSK (dubbed the “world’s No. 1 tribute to Fleetwood Mac”), Hot Blooded – The Foreigner Experience, Simply the Best, a tribute to Tina Turner and 7 Bridges: The Ultimate Eagles Experience.

This list is not complete. Also, several acts listed are returning.

“Some of the greatest music ever made is from ’64 to ’74 and then into 1980. There’s a real resurgence in the nostalgia of this music,” said Jason Manning of 7 Bridges, a Nashville-based ensemble that sells out Circle Square Cultural Center each time it plays there.

Thing is, the big acts from the ’60s, ’70s and ’80s have either stopped touring, died or, if they are touring, command $200 ticket prices. But fans still want to hear that music. And when given the choice between a $200 ticket to a show hours away or a $20 ticket to a show minutes away, they will opt for a date night or girls night out in their hometown.

Tribute bands also are cheaper for venues. In between $30,000-plus headliners, sprinkle in some tribute bands for $12,000 or less. Ticket prices are lower, but tribute bands generally fill — at the very least — several hundred seats.

“We’ve had quite a few sellouts. These things are hot,” she said. “It makes for a great date night. A lot of (the tribute acts) really keep true to the band.”

From teens to baby boomers, people simply love the sounds, styles and attitudes of classic rock. Teenagers are now collecting vinyl records and wearing Beatles T-shirts, so a $20 ticket to see what they missed all those years ago is quite reasonable, local sources contend.

“We turn down more shows than we accept,” Manning said, noting 7 Bridges also caps its tour dates these days to allow for more family time and side projects.

“The appetite is there,” said Matt Wardell, CEO and artistic director of the Reilly.

So is the inventory. Wardell said the Reilly gets a handful of calls each week from promoters trying to book their tribute bands into the venue. It’s tricky, Wardell noted, because the Reilly never intended to book tribute bands when it opened, opting to present Ocala Symphony Orchestra concerts, local productions and original touring acts.

But the popularity and supply of tribute bands — good tribute bands — is not to be dismissed. WIND-FM rents the Reilly to host their tribute shows, but the Reilly staff has started booking their own tribute concerts in between larger acts and symphony shows. Last weekend’s Denny Diamond concert, for example, was a Reilly-hosted show, whereas Let It Be will be part of the WIND-FM series.

But, now, a performing arts center such as the Reilly or Circle Square is perfect for tribute bands. Fans of the original bands are at an age where sitting down with a cocktail is far more appealing than going to a sweaty bar or a stadium that demands standing.

“I saw the Queen (and) AC/DC show at Reilly. It was awesome. I also went to the John Denver one and the Elton John show. I love them,” noted Ocala resident Laura Fontaine. “I like the tamer atmosphere with the great music.”

“We still want to hear the authentic bands we love, but can we afford it?” noted JoAnn Grosso, adding she has been called up on stage to dance at tribute shows. “I can afford the Reilly and can make it home safe.”

Other locals are not quite on board with the tribute band proliferation.

“I feel like I can just break out my records or go on Spotify and listen to the masters. And it’s free,” noted Jen Normoyle.

Wardell said the Reilly does not want to be tribute band-heavy. It strives to fill its schedule with diverse and original acts with headliner appeal. But the tribute band market is hard to ignore. He said the Reilly vets tribute acts carefully, examining internet clips and talking to references.

To be sure, there are bad tribute bands out there. But the increase in tribute bands also means there is a larger number of good bands, Manning said.

“The tribute bands have really stepped up their game in the last five or six years,” he said. They know how to put on a good show — a production with lights and quality sound and interaction.

“The tribute bands,” she added, “remind us of the way it was and how good it was.”