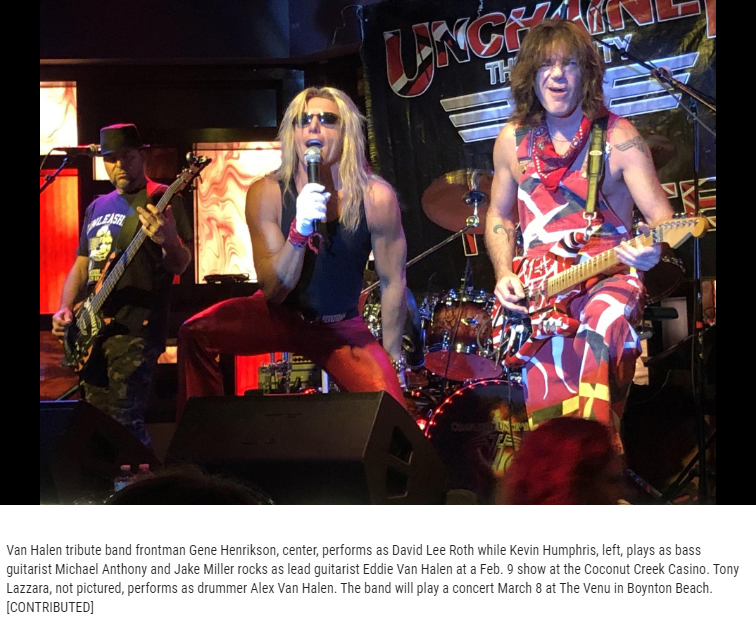 Bare-chested except for the crimson suspenders clipped to his matching leather pants, Completely Unchained front man Gene Henrikson belted out, “Are you ready to rock tonight with this Van Halen tribute band?”

As his David Lee Roth-like blond wig dripped sweat down his back, the guitar intro to “You Really Got Me” resonated through the blackjack tables. The crowd pumped their firsts in the air with a resounding “yeah” that echoed through the rows of tinkling slot machines recently at Coconut Creek Casino. Waitresses had a hard time squeezing their trays of drinks through the audience of more than 200 that stretched from the small stage through the packed lounge and intruded into the game tables.

“When we do Van Halen, we create the right atmosphere,” said Henrikson, of West Palm Beach. “The costumes, mannerisms and delivery mean a lot to our fans. It’s about creating that Van Halen environment where the show is like a backyard barbecue where everyone has a good time.”

Dan Swenson wore his Van Halen T-shirt and coveted his spot by the stage. Swenson has attended at least 25 shows by Completely Unchained, including the Battle of the Bands on Feb. 2 at the South Florida Fair in suburban West Palm Beach. Unchained won first place, beating out such rivals as Guns N’ Roses.

“These guys are hard-core musicians,” Swenson said. “Gene (Henrikson) is actually a drummer, and all four guys can sing their heads off.”

According to the group’s website, Completely Unchained is the only complete Van Halen tribute to perform the entire catalog: “All the lights, the sound, the magic, and most of all the spirit that captures every era of Van Halen. All the classic hits, the Sammy Hagar years, and David Lee Roth’s greatest solo hits.” From the original band days through the Roth era and Hagar’s tenure, fans will hear 1978′s “Runnin’ with the Devil,” 1984′s “Panama” and 1986′s “Why Can’t This Be Love.” Of course, the tribute band also plays its namesake hit, “Unchained,” from Van Halen’s first self-titled album.

The band’s popularity has them tightly booked through August up and down the East Coast, and of course, all over Florida. Thirteen shows are slated for March, including one on March 8 at The Venu Restaurant in Bar in Boynton Beach.

The group is used to quick turnaround between gigs. The night before the casino concert, they performed near Orlando and returned to South Florida just before sunrise.

Last year, on Valentine’s Day, Completely Unchained was chosen to perform for the troops stationed at Ali Al Salem Air Base in Kuwait. Afterward, the band spent time with audience members. Some of them had been deployed in Syria, Iraq, Afghanistan, Kuwait and other countries in the region.

“They all had some incredible stories,” said Miller, who dons famed guitarist Eddie Van Halen’s guitar stripes for every show. “We were very humbled to say the least.”

A commander even played the drums for one song. Through one week, the rockers performed on little sleep. When they left, they came home to an immediate show in South Florida.

“It was an honor,” Henrikson said.

Henrikson, who just turned 57, has a strict ritual the day of each concert. He exercises and lifts weights while he listens to Van Halen, his favorite band since he was young.

This year marks the 40th anniversary of the release of “Van Halen,” but Henrikson said Unchained fans like the music from every album, so that’s what’s on its playlist. No matter which era of Van Halen, Completely Unchained aims to deliver the most authentic show each night for their fans.

“Some fans that come and see us say they had a rough week and we made it better,” Henrikson said. “At some shows, it feels like we’re providing therapy.”